This kind of torture against police victims, is the usual NAZI NORWEGIAN Kafka process, hoping they manage to get the victim to take its life...... 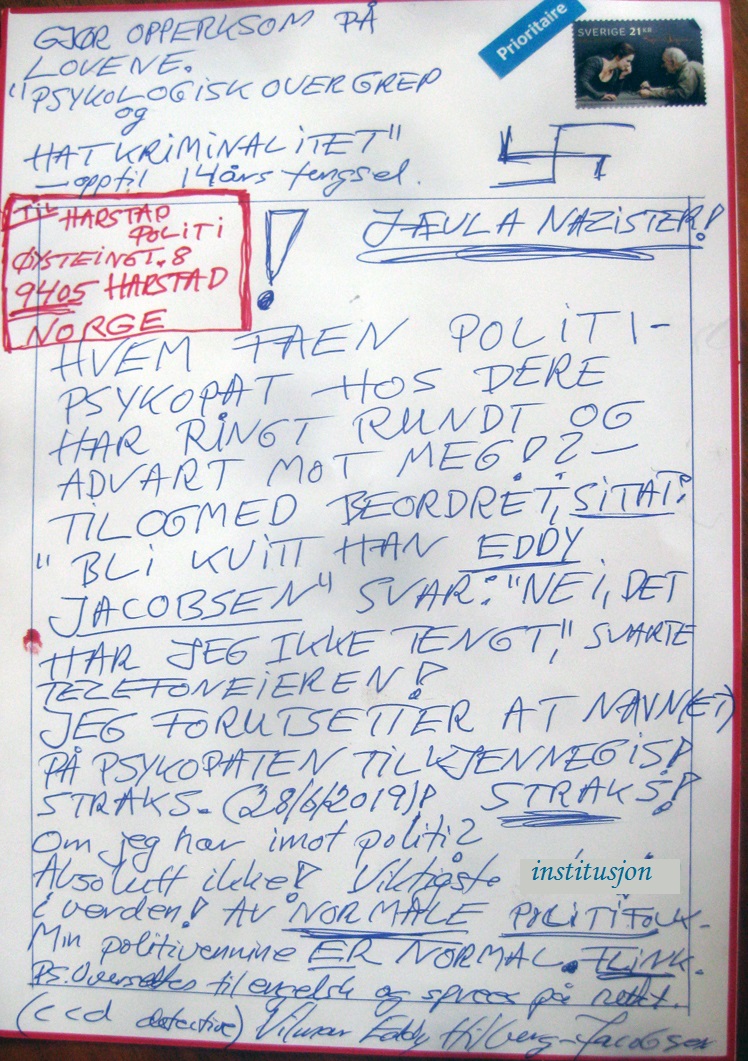 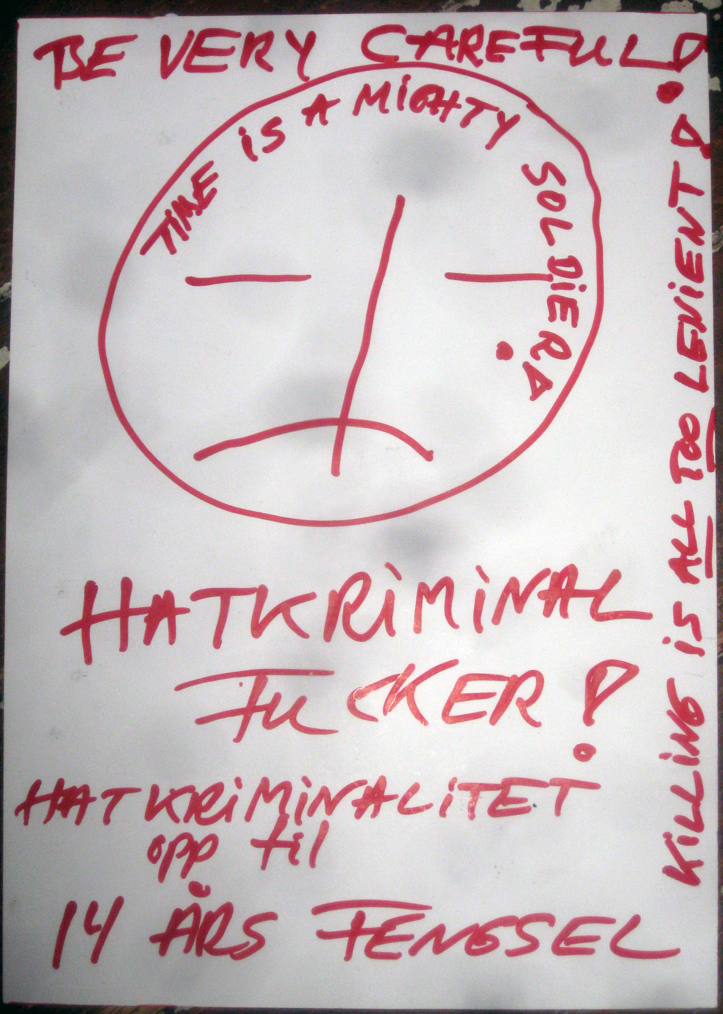 Who the fuck is that police psychopath at your station, who are making phone calls and warns against me, - even given an order, quoting; “Get that Eddy Jacobsen out of your life” Answer, “No, absolutely not” – answered by the phone owner,

I take it for granted that the name of the psychopath is getting know!!! IMMEDIATELY!!

If I am against police???

Absolutely NOT! Most important institution in the world!! OF NORMAL POLICE!!

PS: Being translated to English and spread on the net. 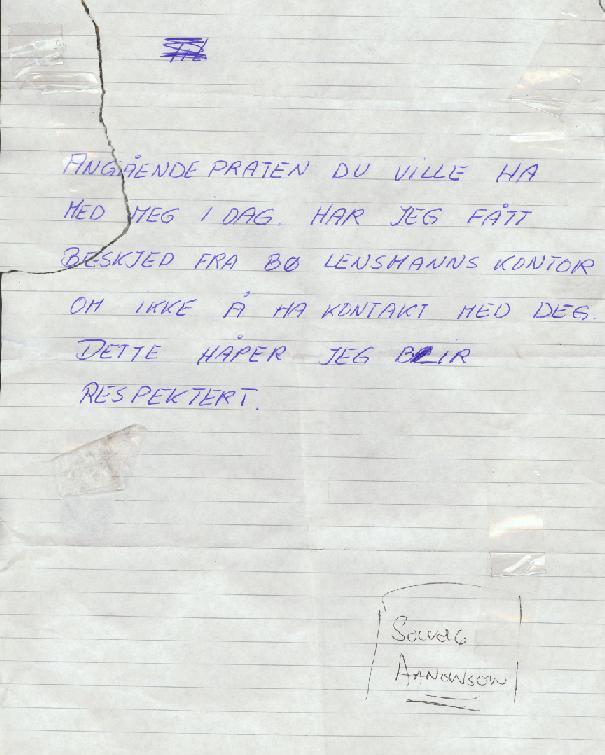 Pestering staff at hotel Moksir in city Chrzanow, telling the woman staff to "not say anything" - but the were very unlucky, because staff Piotr told me instantely of this Nazi gangster from the Norwegian embassy in Warsawa...........and he wrote me this....:

.......more evidences from the Nazi gangster Norwegian government will be posted hence...... - the primer - couldn't care less......mark that she is not commenting at all of the death penalty sentecing of the islamic predators who  murdered the 2 girls, Maren and Louise in the most grisly and grim way.......Louise's mother has shauted out that they should be killed........but Mr Fatty is totaly silent.......properly she will protest on "such a gruesome punishment for the predators"  She didn't even particiapate in the funural of Norwegian Maren, but sent a  puppet member of parliament, who urged people to "not be afraid and travel freely in all country in the world" - knowing that several national security officials WARNS against travelling in islamic countries......And primer, Solberg, she - only days after the funeral - excelled herself on TV - DISGUSTING WOMAN..........Uuuuuuuuuuuuuuuuuuuuuuuuuusch  !!!!  UUUUUUSCH  !!!

BLOCKING PROSTITUTE ON THE NORWEGIAN JUSTICE DEPARTMENT  - and with a NUTCASE as primer now, those breaching of INTERNATIONAL HUMAN RIGTHS LAWS CAN GO ON UNSTOPPED 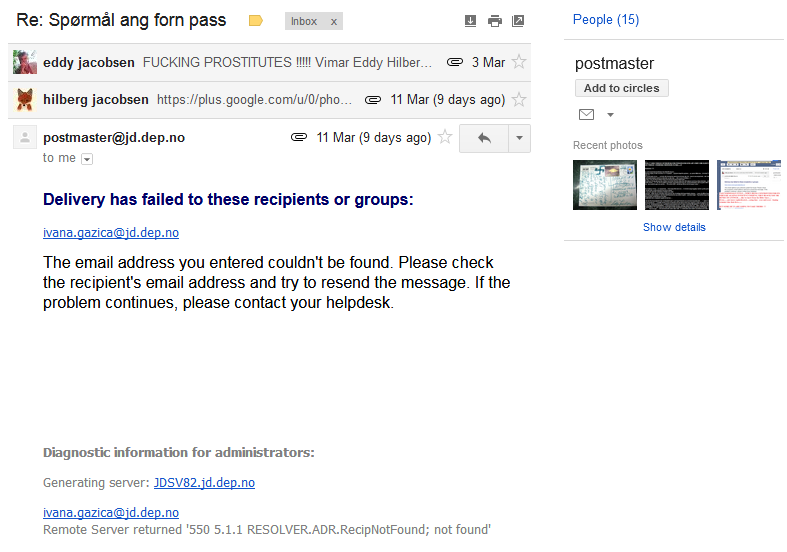 AND MUCH, MUCH MORE EVIDENCES TO BE POSTED OF HORRENDOUS TORTURE OF NORWEGIAN CIVILIANCES BY THE NAZI TORTURE GOVERNEMENT REGIME.......leading on, and encouraged by the islamisastion present primer, who NEVER sat foot in a synagoge, but frequently visits mosques, where she takes selfies and posts on Mr  Zuckerberg's fraudster book, so-called Facebook.....(read more about that on this site; www.facebookyouandi.com)

NORWEGIAN STATE MAFIA DICTATORSHIP DENIES LAW STUDENTS TO GIVE FREE ADVICES TO POOR PEOPLE - (and if you have heard the state-MAFIA-GOVERNEMTN'S fake information that there are no poor people in Norway, you should read facts, because there are thousands upon thousands of very poor people in Norway) - so when I studied law - I had recurrenty request for aid for those poor people, - but the Norwegian state MAFIA didn like that, so I had a WARING that I would be prosecuted if I continued to give legal advices to citizen. 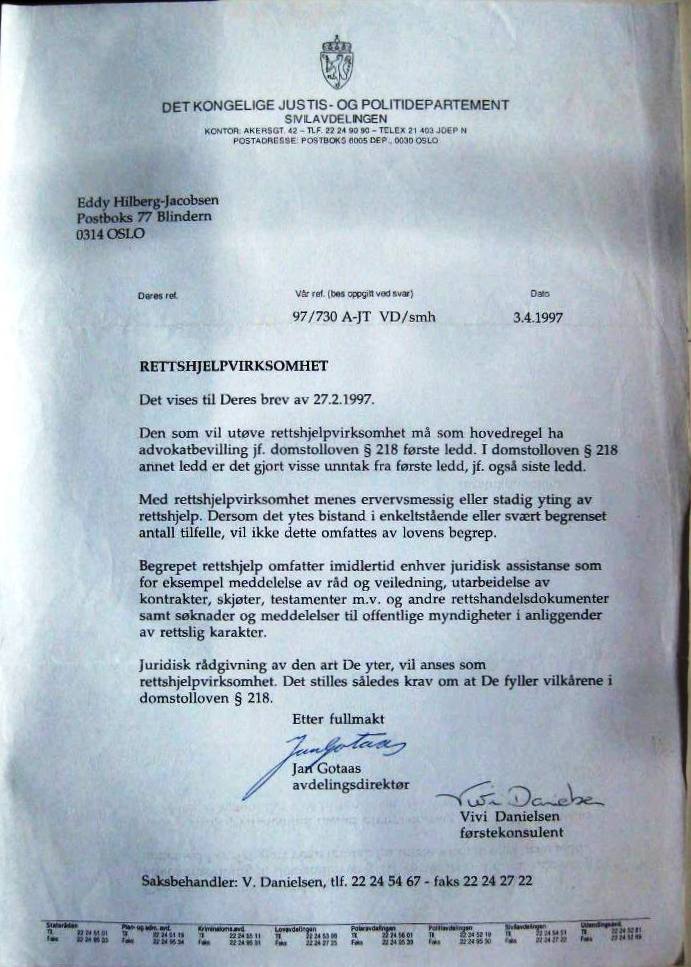 Translataion to English of the essence of this state MAFIA DECRET to me; " Judicial advices of that sort that you support, will be considered as "judicial law support activity". There is therefore DEMANDS that you have the conditions of that of the court law § 218

And since I gave a dawn in the state MAFIA DECRET as I wanted to help the downtrodden by the same MAFIA and destitute people, totally without resources for seeking help, - I was now being harrassed by the NORWEGIAN STATE MAFIA. The HITLER-MAFIA, who handed over 1200 Jews to the Nazis for extinction. But as in other free countries, where the Nazies still are hunted down and jailed, NORWEGIAN STATE MAFIA - THE NAZI MAFIA - included islamisation primer Erna Solberg, is UNWILLING TO HELP NAZI HUNTER, MR ZUROFF's LAST-CHANCE OPERATION. Why?? Because Nazi war criminals are still living in Norway. That is also what they could risk from a lawabiding and rightiousness man as Vilmar Eddy Hilberg-Jacobsen, to have recalled the licence lawyer certificate.

And by this sadist psychopath lawyer John Christian Elden, they get great support to hunt me and harrass me round the world..... This sadist psychopat lawyer is selling confidential documents from former clients who have exposed his criminal activities of helping THE STATE MAFIA with information about clients who are exposing THE STATE MAFIA CRIME agaisnt the citizens. Present primer Erna Solberg was caught breaching the very strict alcohol law, by being filmed by media totally drunk in his garden.

Another Norwegian law-abiding person, a woman journalist, Fossum, was also harrassed and persecuted the same way, and she sent me this email: - (will be translated in full at a later time) 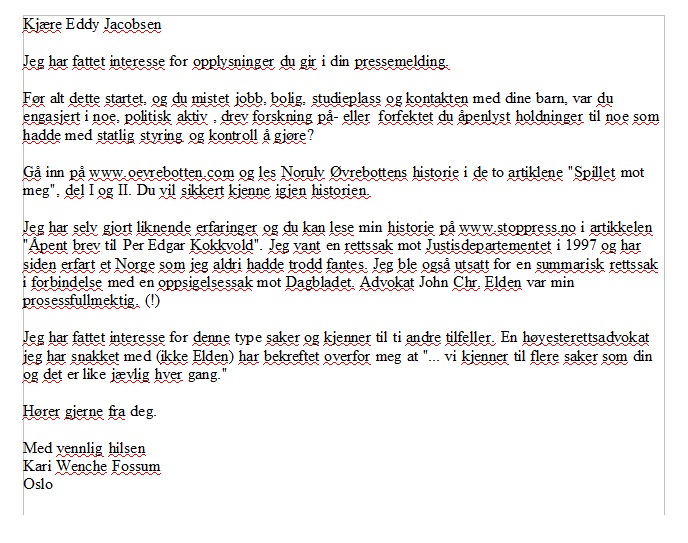 Essensiel is that she says, she knows about those kinds of horrenous attacks and persecution of innocent citizend by STATE MAFIA OFFICIALS, and says here that "she knows 10 other similar cases"

Quoting; "We know several of cases like yours, and it is equal hellish for all of them"

This fucking sadist psychopath police Liv Daa Gabrielsen (former name Mjaaland) killed the man Per Liland, by falsly jailing him SEVENTEEN YEARS - 17 YEARS - for murder he hadn't done.....how was that possible?? Simple; she stole his de facto evidence - a money-suipport requsition from local welfare; and the date were changed in order to match the falsification - also nicking his receipt for being in a food shop at the time of the murder - for this horrible woman's psychopath's crime; to get him jailed for murder. Here is the BEAST. -------------

Her crimes are endless, and guess what!!! - she was not even arrested or charged when the gruesome facts of the false arrest and jailing of Liland came to light; instead that fucking psycho bitch got another job. IN CHINA THEY SHOOT CORRUPT POLICE LIKE HER, IN NAZI MORWAY THEY HAR PROMOTED.

Read this, on behalf of our detective colleague and friend Vilmar Eddy Hilberg-Jacobsen.....: Divorced from his psychopath wife, Vigdis - living in this corrupt police area when she concocted a new police crime...: Eddy and his now girlfriend, Emmy and her friend, Marit, were all 3 going for holiday in England, and since he would be away from his son, Paal Espen for several weeks, he made and arrangement with his bitch ex-wife, that his son should stay with him from Friday till Monday morning - a s they were to leave Tuesday - instead of the court document till Sunday - and the bitch ex-wife agree on that change.

Saturday launch after he and his son returned from swimming session, his neighbour came rushing to him and frightingly said; "Eddy, police has been here, they are looking for your son as you have kidnapped him" - they say.

IMAGINE THAT HELL THAT LITTLE BOY WENT THROUGH......the designer Liv Daa Gabrilsen - her surname then was Mjaaland - had fabricated togeter with the sickening psycho sadistic bitch Vigdis, his mother, to launch a KIDNMAP WARRENT.

We just tell you, fucking sick, now old ugly FUCKING BITCH - (who can no longer spread your legs and hell your pussy for gains from psychologists, judges and state attornay; you are too fucking old and ugly for that now...........sicking disgusting MONSTER - - IF YOU EVER CROSS Eddy's path; you will certainly be ripped apart - BITS FOR BITS!!! 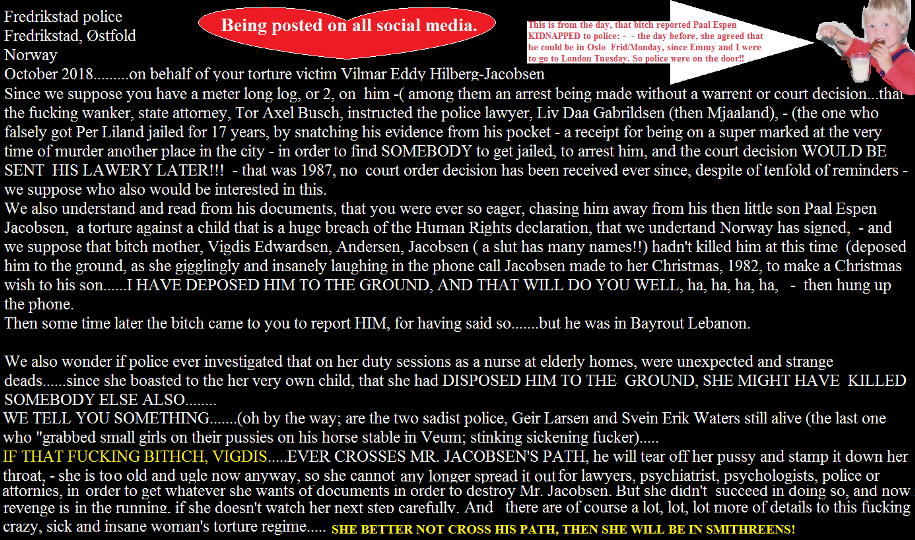 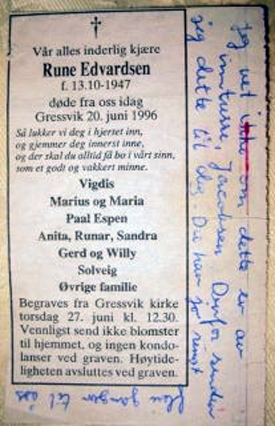